skip to main | skip to sidebar

To enter Rio is to enter Byzantium. The young in one another's arms, the dolphin-torn sea. Just walking the streets here I feel ragged, stick-like, which is to say I am conscious the city is more attitude than place, is the catalyst for an emotional reaction to which leaves me inert. Everywhere I look people are living out their test-tube vacations, bubbles of laughter fizzing from their eyes.
Posted by Falstaff at 6/27/2010 05:32:00 AM 4 comments:

a way of seeing
the invisible.

Attribution Error in the Blogosphere

To credit all positive comments to your own perspicacity and talent, and blame all negative comments on the stupidity and prejudice of your commenters.
Posted by Falstaff at 6/17/2010 10:13:00 PM 3 comments:

"For many centuries in the Western tradition, how well you expressed a position corresponded closely to the credibility of your argument. Rhetorical styles might vary from the spartan to the baroque, but style itself was never a matter of indifference. And “style” was not just a well-turned sentence: poor expression belied poor thought. Confused words suggested confused ideas at best, dissimulation at worst."

That's Tony Judt over at the NYRB blog. It's a point of view I happen to wholeheartedly agree with, if only because empirical observation proves it to be true. People who write badly think badly. Every now and then I'll grit my teeth and try to read something that's ungrammatical and badly structured because what it says might be 'important' (for a particularly egregious recent example, see here), and almost without exception the piece in question will turn out to be illogical, incoherent or just plain silly.

(This doesn't work in reverse, of course. The most exquisite prose may make no sense whatsoever).

I think the point is that lucid writing is a byproduct of a process of careful thought. The more deeply you think about an issue, the more word choices start to matter, the clearer the purpose of each phrase and each sentence becomes, and the more the sentences themselves fall into a natural order. Clarity of thought produces clarity of writing.

If it were possible to spend what one does not own, I would trade the restlessness of the ocean for this moment of silence, you and I alone on the balcony, high above the traffic, afraid to look down. You say you are afraid of falling. I say I am afraid of heights. What we have in common is that we understand these two fears are not the same. The balcony is a cage of glass and air. We both wish we didn't have to fly.
Posted by Falstaff at 6/17/2010 12:40:00 AM No comments:

No, the madness didn't destroy him. He outlived them all: Cassady, Kerouac, Allen himself. Survived the drugs and the alcohol, the sex and the protests, to die unoutrageously of lung cancer at the age of 76.

No, he was not his animal. In the poems he is an altogether quieter, more domestic presence, a shadow you barely see. And yet he is there on the front page of Kaddish, an angel of grief, and there again twenty years later, lending his back and strong shoulders to Ginsberg Sr., being told not to grow old, and (as we now know) ignoring the advice. He is there in the elegies to O'Hara and Cassady, lending his sympathetic ear and voice to the general sorrow. Again and again, when death intercedes, he is there to comfort, console.

When they first met, half a century ago, Allen wrote:

"discovered a new young cat,
and my imagination of an eternal boy
walks on the streets of San Francisco,
handsome, and meets me in cafetarias
and loves me."

and here they are, 40 years later, two old men sitting in companionable silence around a dining table; two bowls, chipped and almost empty, laid side by side. 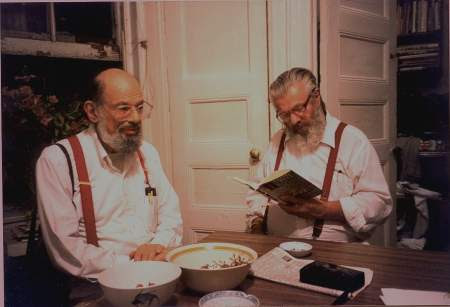 No, he wasn't the best mind of his generation. But what he was, and what he had, is hard not to envy. And if even some of the power of those poems draws strength from his presence, that is more than most of us can hope to contribute.

Ginsberg quote taken from 'Malest Cornifici Tuo Catullo' . Ginsberg and Orlovsky image taken from this piece by Gordon Ball in Jacket, July 2007.
Posted by Falstaff at 6/01/2010 07:38:00 PM No comments:

Method to the Madness